Birthday parties are fun at any age but incomplete without birthday party games. If you’re looking to organize games for a birthday party at home, surprise birthday party ideas, and more, we can help you. As one of the most reputed birthday party organizers in Bangalore, we provide gorgeous balloon decorations and custom home decoration supplies to make your gathering fun and glamorous. Visit us!

Different kinds of birthday party games are suited for kids and adults. Let’s explore some thrilling ideas for games that will have everyone talk about your birthday party for ages!

Here are some birthday party games that adults will enjoy:

We have all played charades at some point in life. Not only is it easy to understand, but it’s also quite a fun game to play with friends. Pick a theme, such as movies, TV shows, or words in general. Make a group of two people or more. Write down the words to be enacted on a chit and put them into a bowl, and a member from each team is then required to pick a chit and act it out till their team members can guess what they’re trying to say. The team with the maximum number of correct answers wins.

In Cards Against Humanity, a player has to draw a question from the black cards while the other players have to answer using the white cards. The cards contain different subjects, with most of them being serious themes, and it helps the players learn about certain important issues. A pack contains 500 white cards and 100 black ones, providing multiple options and enough for the game to last for a long time.

Pictionary is similar to Charades in the sense that while the former requires you to draw something, the latter calls for the players to act it out. Pick a theme, write down the words into chits, and put them in a bowl. Divide the guests into groups of two or more. One by one, a player from each team gets up and draws the word they pick up from the bowl on a whiteboard. The team with the most number of guesses wins.

This game can also be played with two teams simultaneously, the difference being that the team that guesses first wins the game. 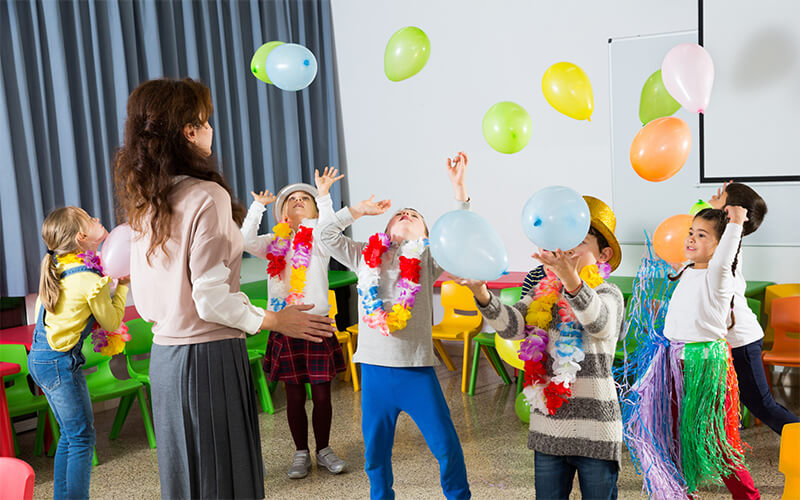 Never Have I Ever

If you’re looking for a fun drinking game on the occasion of your birthday, there are few as exciting as Never Have I Ever. In this game, players must say something they have never done before, such as “Never have I ever been to Thailand,” “Never have I ever had mango cheesecake,” and so on. The players who have done that particular thing or activity should then take a sip, and that’s how the game keeps going.

Two Truths and a Lie

Two Truths and a Lie can be an exciting way to learn more about your friends. As the name suggests, in this game, each player has to state two truths and a lie about themselves, and the rest have to guess which is the lie and which is the truth.

Want to keep the little ones entertained during a birthday celebration? The following are some games to help them stay engaged:

Musical Chairs have been an eternal presence among games for children for ages. Arrange the chairs so that the chairs placed next to one another aren’t facing in the same direction. If there are 10 kids present, for instance, keep nine chairs.

Play the music and let the kids run around the chairs. Once the music stops, the kids need to grab the chair nearest to them. The one who cannot grab a chair gets eliminated, and that’s how the game continues till there’s a winner.

Pin the Tail on the Donkey

For this particular game, you need to buy a tail as a prop. Put up a poster of a donkey on the wall. Blindfold the kids as they come to play, spin them around a few times, and let them guide themselves to attach the tail to the donkey’s poster. The one who sticks it as close to where the tail should be becomes the winner.

Pass the Parcel is a game that excites children because its rules are pretty simple. Get a gift you think the kids will like and wrap it in multiple layers using newspaper, wrapping paper, or whatever you can grab. Try to keep it to one layer per child.

Start playing the music and let the kids pass the parcel within a circle. Once the music stops, the child holding the parcel needs to unravel the top layer, and the game continues. Ultimately, the kids who unveil the last layer are the winner and get to keep the gift.

The Marble and Spoon Race is fun, and kids get wonderfully competitive. Make the kids stand near the starting line. Give them all a spoon and marble each, placing the marble on the concave part of the spoon.

Since kids are involved in the game, keeping the scavenger hunt relatively simple is best. Also, to encourage the children to give their best, try to make each clue a prize that the respective ones get to keep in case they find them. The items can be small things such as painted rocks, printed tokens, colorful gemstones, etc. The kid who manages to find the most items wins the game.

The Sack Race requires you to prepare a burlap sack for each player. You can also choose to use a giant pillowcase. Each kid needs to put their fit inside the sack, and as soon as the game begins, they should start hopping. The first kid to hop and reach the finish line wins.

How to Celebrate an Unforgettable First Birthday for Your Kid
September 27, 2022

5 Things to Consider When Planning a Successful Birthday Party
September 13, 2018

How to Plan a Successful Birthday Party for a Loved One?
July 27, 2018