Birthday party doesn’t seem to be the same without balloon games as the pleasure and enjoyment they add to the party, making it a memorable one to be remembered for a longer period of time. Bright and colorful balloons always are loved by almost every kid. 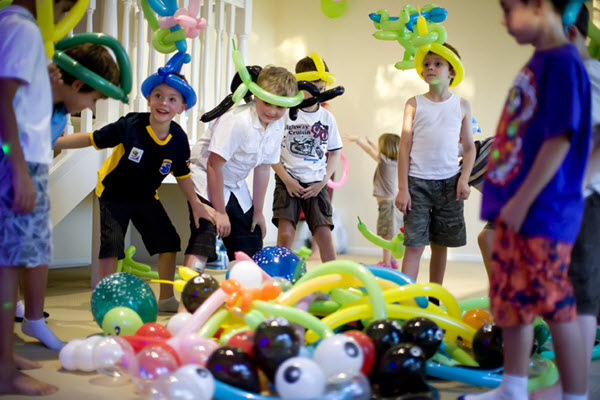 There are many creative ways to enjoy the balloon games at kid’s party and make them feel really special, engaging them completely in the party and enjoy it. This article deals with balloon decoration for birthday party in Bangalore. So given below are some of the best balloon games for kid’s party:

This is not a competitive game but more of a fun game. In the game, one adult can gather children in a circle, himself being the center.

The adult would toss a balloon and ask out the name of a specific kid to catch that balloon before it touches the ground. If the kid catches it, he would get a chance to toss the balloon next time.

This is really a funny but challenging balloon game. In this game, choose out two or more than two children who would take part in the game.

Now draw two parallel horizontal lines between which the race will take place while as many as vertical lines as many the children are playing the game.

You might call this a scientific balloon game but this is a really interesting game. The game would take place in sunlight and the players should be prepared for that.

The kid who bursts the balloon first is declared the first and so on. In the game make sure that each child is in bright sunshine.

Being honest, this is one of the hilarious balloon game you would see and this should definitely be included in the balloon games list for the kid’s party. For the game, you require a good number of balloons.

Blow up 15 balloons and spread them on the floor. Now give each kid 2 minutes to seize the balloons. The player can seize the balloon in any way he might want like between the legs, inside the cloth or even on the head.